“The act of Generosity comes either from the quality education or valuable ethics“. School principle Basim Ahmed Faridi sets forth an example of generosity as he vows to bear the educational expenses of a child that went viral selling samosas outside a hospital.

The little boy Zahid’s confidence, and fearless attitude is what has garnered love from the people.“I come here after school hours,” the boy had said in the video. When asked about the grade he studied in, the boy replied, “I am in class four.” 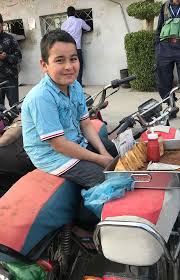 An Act Of Kindness Is Never Wasted

Subsequently, as the video got viral on social media. School Principal of Speak and Spell came forward with the proposition of vowing to bear all the educational expenses of the boy. Basim shared this post on Facebook, by pledging to give the child, what can never be taken from him, i.e. the gift of free education.

“I got a chance to meet this child whose video went the viral past day. Zahid is a son of an Afghan-origin family and he lives near Mamji Hospital water pump in a house where his grandfather and uncle have worked for 30 years,” he said, adding that Zahid’s family is family that for their self-respect and never ask for money from anyone.

“I have offered to his parents that Zahid can study at my school. Entitled Speak & Spell Schooling System near Ayesha Manzil and Mukka Chowrangi up to his matriculation,” said Faridi. Furthermore, the principle also gave the offer of bearing the child’s educational expenses up to his intermediate. As he is running a coaching center where he has been teaching Physics for a long time.

The principle shared light on the meeting that actually went quite emotional. Moreover, he held the community responded by saying that the media will only call him on sets for interviews. This would only help the media in boosting their TRPs rather than truly helping out the child.

Impact On The Community

Upon this act, lots of people over social media have poured in their messages. Certain diversified viewpoints can be seen. Planning and Development Minister Asad Umar praised the boy for his dedication and sheer will by saying: “MashaAllah what an inspiration!“. However, apart from the positive comments, one social media user shared her own point of view regarding this matter.

“What about all the other little Afghani, Hindu, Christian, Muslim Pakistani. kids we see picking filth from garbage dumps on their backs around Clifton DHA. And elsewhere in Pakistan to be able to buy a one-time meal for their family.”

Furthermore, she added: “What about the underage 5-year-old child who sells flowers at traffic lights and you hush him away? The girl child who chases your car with poor hygiene begging for some support?”

However, we think that education is everyone’s right and no earthly power can deprive any child of that!

Step Aside Amazon, Pakistan Gets Its Very Own Electric Rickshaw!